The winter solstice is a time of letting go & also a time of receiving new energies. It’s a time of ending the darkness & embracing the light. The days get longer and it’s a time of death & rebirth.

Celtic prayer for the Winter solstice: ‘May I find the wisdom & courage to be present in the stillness & darkness of the void’

We honour the season of winter as the long bright summer days are behind us. The days from now will begin to get longer as nature will bring us back through the seasons to the longest day of the year for the Summer solstice in June as we journey along the cycle of life. We connect with our greatest teachers & healers, mother earth & father sky, our ancestors & give gratitude for life at this time of year & all we can learn from it.

Experience:
Opening Sacred Space
Shamanic cleansing
Fire Ceremony
Drumming circle
BOOK ONLINE
At Winter Solstice people gather at the huge cairn in Newgrange, County Meath, Ireland & elsewhere the northern hemisphere to celebrate the return of the light. People in the southern hemisphere are celebrating the summer solstice. The sun at Winter Solstice is at its lowest arc in the sky and it was celebrated as the sun’s rebirth by Irelands ancient astronomers. Newgrange is the most famous Neolithic monument on the Island & predates the arrival of the Celts to our shore. It’s part of bru na boine which also is home to Knowth & Dowth both passage graves. Newgrange is famous for capturing the sunset through it’s roof box on the shortest day of the year. The sunlight illuminates the passage chamber for a 5 day period either side of the winter Solstice. Newgrange was built in 3200BC. In ancient Irish mythology Ireland was ruled by the Tuatha de Danann and were said to have erected Newgrange as a burial place for Chief Dagda Mor and his three sons. The Tuath De Danann is usually translated as the people/tribes of the goddess Danu who was the mother goddess and in Irish shamanism known as Mother Earth. They were also known as the tribe of the gods & were thought to represent the deities/gods of pre Christian Gaelic Ireland. The great mythical hero Cuchulainn was thought to have been conceived in Newgrange. The Winter Solstice day marks the day when Samhain ends & the Winter Solstice begins. Samhain which began at Halloween signified the ancient celtic new year and we’re now through those few month of the darkest time of the year. Now with the sun’s rebirth a new calendar year is almost upon us and of course the great celebration of Christmas. 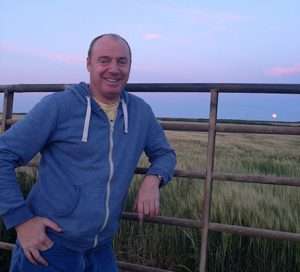 Danny Ahern is a practicing Shaman. He received his Medicine & Healers spiral training in the Irish Centre for Shamanic studies, Dunderry, County Meath & Smithfield, Dublin with Slí An Chroí.